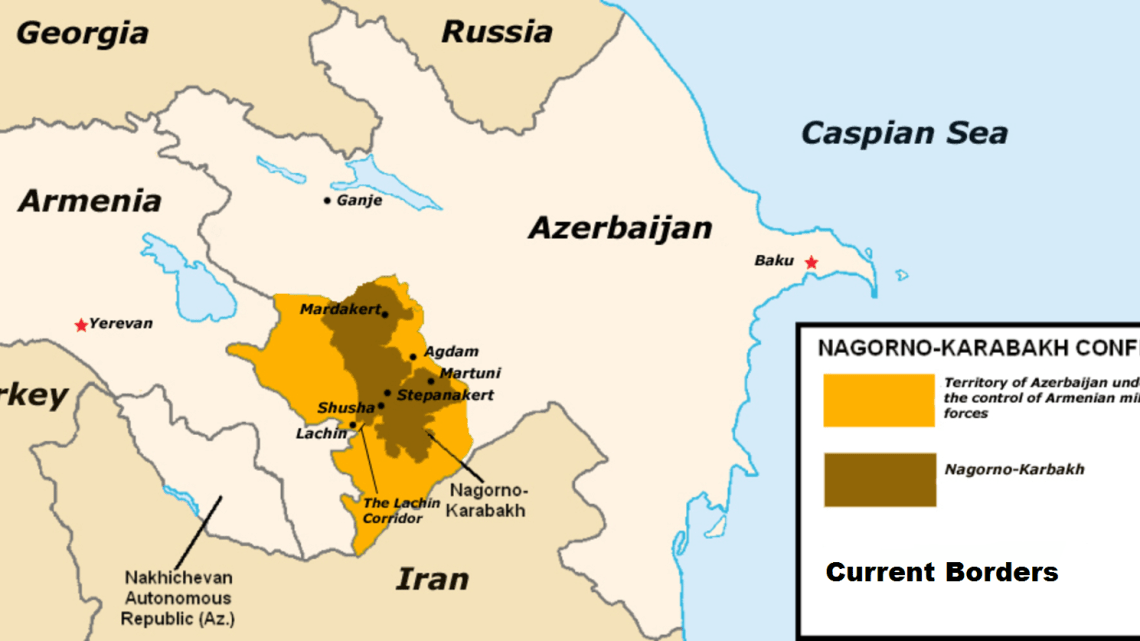 War is always a tragedy. There are no winners in the war. Each side is losing something. As for the conflict between Armenia and Azerbaijan over Nagorno-Karabakh, there are two conflicting views on both sides, which should be considered in detail. I regularly follow the German media and often come up with a biased form of reporting on this subject, Asif Masimov writes in an article Argumentationen Armenien vs. Aserbaidschan for Freitag.de.

Nagorno-Karabakh region in the context of world order

Let’s start by defining the framework of the existing world order. These are the Westphalian system (1648), the Versailles system (1815), the Versailles-Washington system (1918), the system of international relations after Yalta and Potsdam (1945). Sometimes, the time after the end of the Cold War (1991) is also mentioned. In this context, it should be noted that the Caucasian republics first gained independence in May 1918 (Georgia on May 26, 1918, and Armenia and Azerbaijan on May 28, 1918). The annexation by the Red Army of these three Caucasian republics marked a new chapter in their history. All peoples suddenly became “brothers,” but the “friendship of peoples” turned out to be functional only until the Armenian nationalists made claims to Nagorno-Karabakh and Nakhichevan back in the 1960s.

If we consider the Nagorno-Karabakh region within the Caucasian national states, then this subject was part of Azerbaijan after the First and Second World Wars. The attempts of the Armenian side to justify separatism by all possible means constantly run into the borders of international norms. According to one of the arguments circulated by the Armenian side, «the Soviet republics […] gained independence, Nagorno-Karabakh also exercised this right.» [1]

The Constitution of the USSR will help us verify the validity of this argument. In 1977, the latest constitution [2] of the Soviet Union, as amended, was adopted. We are particularly interested in articles 72 and 86, which could directly concern Nagorno-Karabakh. According to article 72, the Union republics were allowed to secede from the Soviet Union, but at that time Nagorno-Karabakh was considered an autonomous region. Article 86 confirmed that the borders of union republics cannot be changed without the consent of the republics themselves. [3]

Another frequently used argument of the Armenian side is the following: the Armenians of Nagorno-Karabakh have the right to self-determination as a people. However, there is no such people «Armenians of Nagorno-Karabakh». I perfectly understand the attempts of the Armenian side to convince us that the Armenians of Nagorno-Karabakh have a different dialect or other traditions. But the population of Nagorno-Karabakh was considered the Armenians, Azerbaijanis and other national minorities. In Armenia, there is a nation that has already determined itself and has its own state. Do not forget that the right to self-determination is subject to the principle of territorial integrity of the state. This point was also taken into account in the Helsinki Final Act. [4] Otherwise, countries in arbitrary form would change borders with their neighbors, and would expel one part of the population. As members of the United Nations (UN), both parties must respect international law and structure their foreign policies accordingly. Otherwise, the UN Security Council would not have adopted four resolutions on the conflict between Armenia and Azerbaijan, which call for the unconditional withdrawal of Armenian troops from the occupied Azerbaijani territories and the return of internally displaced persons to their lands. [5]

Many German journalists try to compare the ethnic composition of Nagorno-Karabakh only in the 20th century. In principle, there is no problem. However, most of the information we receive boils down to the fact that the Armenian population supposedly always dominated in Nagorno-Karabakh. When the Russian Empire conquered Transcaucasia, and the Turkmenchay Treaty was signed in 1828, the number of Armenians increased dramatically. After the decree of the Russian Tsar Nicholas I, the «Armenian region» was founded on the site of the Irevan and Nakhichevan khanates. Then the Armenians were resettled from various regions of the Ottoman and Persian empires in order to Christianize the recently conquered territories. Before the resettlement of Armenians, the ethnic composition of the former Irevan Khanate was as follows: about 50,000 Muslims and 20,000 Armenians; 17,000 Muslims and 2,700 Armenians lived in Nakhichevan. [6] Sources indicate that only in 1828-1830, 40,000 Armenians from Persia and about 84,000 from the Ottoman Empire were relocated to the territory of today’s Armenia and Nagorno-Karabakh. [7] Tsarist Russia continued the Armenization of the region in subsequent years. This historical fact cannot be ignored by professionals who continue to study the Karabakh problem.

The Armenian side accuses the Azerbaijani side of pogroms in Baku and Sumgait. Those pogroms were studied in detail. It turned out that then many Armenians really died. However, Azerbaijanis were also killed. So, during the pogrom in Sumgait, 26 Armenians and six Azerbaijanis were killed. Moreover, among the criminals was an Armenian Eduard Grigoryan, who directly led the violence against the Armenian residents of Sumgait. Subsequent trials involving the main accused and affected Armenians took place mainly in Moscow. Almost all the affected Armenians were able to identify Grigoryan as the main culprit. However, the Armenian side is trying by all means to hide this fact.

The question arises why it is impossible to compare the pogroms in Sumgait with the tragedy in Khojaly. Because in relation to some Sumgayit criminals, sentences were passed, including mortals; there was a lawsuit. In addition, Armenia and Azerbaijan at that time were still part of the USSR. In the case of Khojaly, we are dealing with criminals who killed hundreds of civilians, and then held high posts in the independent Republic of Armenia and are still at large.

Of course, the killers have no nationality. Errors must be acknowledged. Armenian authorities should apologize for the genocide committed in Khojaly. Azerbaijanis should also express condolences to the relatives of the dead Armenians. However, it is impossible not to take into account the fact that the pogroms of Azerbaijanis also took place on the Armenian side. At one time, the Armenian journalist Mane Papyan revealed interesting facts, finding out that in the Armenian regions of Kafan and Gugark, where Azerbaijanis lived compactly, the pogroms were carried out by Armenians. In 1988, seven Azerbaijanis were killed in the city of Vanadzor (formerly Kirovakan), and Azerbaijani families were persecuted and exiled. In another Armenian city, Gugark, in November 1988 at least eleven Azerbaijanis were killed. The number of gangs of Armenian nationalists who persecuted Azerbaijanis also increased. The article by Manet Papyan can be found here. [9]

When we talk about the pogrom in Sumgait, many forget that before these events, deportation of Azerbaijanis in 1987 took place. In his book The Black Garden, British researcher Thomas de Waal writes that in November 1987, two freight cars with Azerbaijanis arrived in Baku and were expelled from the Armenian city of Kafan. Unfortunately, these tragic events were not covered by the media in Armenia and throughout the Soviet Union. [10]

The widowed Baku Armenian Sveta Pashayeva recalls those events: “People came and said that two wagons with naked, undressed children arrived from Kafan and we went there. They were Azerbaijanis from Kafan. I was at the station, and I saw two freight wagons. The doors were opened, and two long boards, like handrails, were nailed to the wall so that people would not fall out of the train on the go. We were asked to help the refugees. Many gathered old children’s clothes, some things … I saw them myself. «[11]

I have already mentioned the expulsion of Azerbaijanis from Armenia, and I would like to emphasize once again that deportation took place not only in the late 1980s. In 1948-1953, a program was implemented, as a result of which thousands of Azerbaijanis were forced to leave Armenia. It was planned to resettle Armenians from abroad in their homes. The Armenians, who arrived in the Armenian SSR from Syria, Iran and Iraq, moved to the homes of Azerbaijanis, and the Azerbaijanis themselves were forced to settle in the less favorable territories of Azerbaijan. In official documents, the program was called «On the resettlement of collective farmers and other Azerbaijani population from the Armenian SSR to the Kura-Araksin lowland of the Azerbaijan SSR» [12], which is not true, since the resettlement was forced, and the term «deportation» in this case is more acceptable.

I insist that Armenia must take the first step to achieve peace. As long as the Armenian troops are on the territory of Azerbaijan, until the internally displaced people can not return home, while the international community and the media use double standards, there will be no peace in the region. Both older and younger generations of the two peoples will remain hostile to each other if the Armenians do not take the first step.

[1]  “We have made a commitment, and therefore, we must make efforts to achieve real changes in the region” – PM Nikol Pashinyan’s speech at the Paris Peace Forum